Brewer’s spent grain (BSG) is a byproduct of the brewing process that accounts for approximately 85% of the waste produced by a brewery. BSG is composed of barley malt grain husks and is the solid food waste residue after wort production. Once the malt is mixed with hot water and steeped into sugars, the liquid wort is separated from the solids. This liquid is fermented by the brewing yeast to produce alcohol. Once the barley has been soaked, sprouted and dried it is deemed “spent” because most of its starches have been extracted and it cannot be used to make more beer. The spent grain is initially hot and wet. It has a short shelf-life, providing a persistent challenge for brewers with high production output and/or limited space. In the summer months, spent grain can sour in a matter of hours and create a stinky mess, attracting pests and distracting patrons. To give you a sense of the scale of this issue, every 6-pack of beer produces one pound of spent grain. Simply dumping spent grain into our landfills seems incredibly wasteful and harmful to the environment, not to mention time consuming. Fortunately, there are a number of sustainability options that reduce the waste and environmental impact of breweries, and potentially earn extra revenue.

BSG is naturally high in fiber and protein, making it of great interest as a food additive. Some food companies will grind the spent grains into a powder, replacing flour in baked goods such as snack bars, bread, crackers and pet food. This initiative is known as “saved grains". It can also be used in agriculture as a soil amendment to fertilize crops or feedstuffs for aquaculture. The most popular option for brewers is to use them to supplement livestock feed. The high costs of feed is a major cost for farmers raising cattle and other livestock. This has resulted in great synergy between brewers and farmers in communities as they look for sustainable ways to support each other. When dealing with small volumes, the farmer would be happy to haul off whatever you have for free. It’s also common to barter for beef, which breweries can use in their restaurant. For larger breweries, the volume of spent grain can be significant. Many breweries gain a new revenue stream while improving their sustainability. The value of spent grain is largely based on the moisture content. The drier it is, the more valuable, so it is important to efficiently use the lauter to remove as much moisture as possible. The ideal moisture level is 70-80% so that it stores longer.

Fiber is digestible by ruminant mammals (even-toed, hoofed, four-legged mammals that eat grass and other plants), including cattle, bison, goats, and sheep. And, in fact, most of a brewery's spent grain (BSG) is used to feed cattle. However, BSG can be fed to poultry, if the exogenous enzymes xylanase and B-glucanase are added. These enzymes degrade the fiber from the BSG and make them digestible to the chickens. Hogs will also eat BSGs, although they will derive less nutrition from them than cattle.

The FDA Cares About What You Do With Spent Grain

How you store and dispose of your spent grain matters to the FDA. The Food Safety Modernization Act (FSMA) of 2011 (specifically 21 CFR 117.95) regulates that brewers use proper containers that prevent physical, chemical or biological contamination if your spent grain is consumed by animals or humans. The Sanitary Facilities and Controls section under Good Manufacturing Practices (GMPs) encourages paying attention to spent grain storage – where, how and the duration of storage – because spent grain is a major attractant to small and large pests. Your spent grain bins must be properly labeled so that they are not misidentified as trash. For example, imagine the risk you pose to cattle if broken glass was accidentally swept up into spent grain and fed to them. That’s why the gray Rubbermaid trash bins are a major concern. Bins need to be inspected and sanitized when they leave or enter your facility to prevent contamination from the fields. Listeria is very prevalent in soil, but manure carries harmful bacteria and doesn’t help the taste of your craft beverage. If the spent grain is being used in human food, the FDA mandates that you have a Hazard Analysis and Critical Control Points (HACCP) food safety plan. 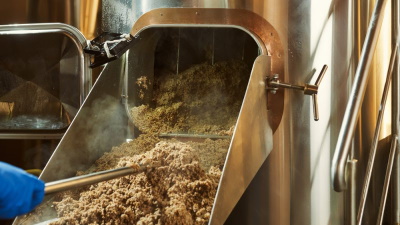 What Are My Options?

Brewers Should Consider Contracts with Farmers

Brewers should consider a spent grain contract with their farmers as part of their Good Manufacturing Practices (GMPs) and Hazard Analysis. This would put into writing any assumptions both parties make about the intended use of the spent grain and the precautions each take to mitigate foreign object contamination. The brewer could assure the farmer that his bins are properly labeled and stored per FDA regulations to ensure no trash or chemicals are mixed with the grains. The farmer could assure the brewer of the intended use of the spent grains (whether it be livestock feed or human consumption) and allow the brewery to properly address the higher regulatory compliance for human consumption. Both parties would assume responsibility for sanitizing the bins when they come into contact with soils or animal waste to ensure the brewer's facility is not contaminated. Written documentation is always more helpful for GMPs/audits and provides traceability should either party have a recall or issue.

Sustainability and the Positive Impact on the Community

The community impact that a few beers can have is much larger than maybe you had previously thought. The local farmer, the brewery, the truckers, the beef plant or creamery worker, the dairy and beef consumer, and all their families, benefit from the synergy of this “buy local” initiative. Breweries improve their sustainability by reducing their waste and environmental impact. Our freight partners have consistent, year-round work. The local, family dairy and beef farmers keep their cows happy, healthy and productive. Milk and beef from these happy cows feed consumers all over the U.S. 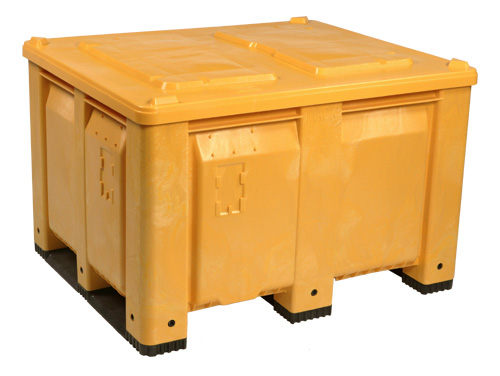 Union Jack provides FDA-compliant bins to help make sure you meet spent grain compliance rules. Our Spent Grain Bins are food safe, sturdy, color-coded and easy to clean. They come with optional lids to keep trash, pests, chemicals and other foreign materials out of stored spent grain. With two different runner options, they are easy to transport via pallet jack or forklift, and can be dumped with the proper forklift equipment. Let us be your partner in FSMA compliance!

Keeping it Clean Since 2006